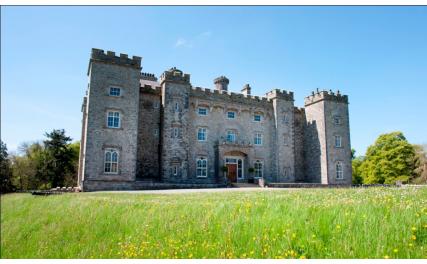 Slane Castle is the residence of Ireland’s most famous aristocrat, Henry Conyngham, Earl of Mount Charles.

Slane Castle is set on the grounds of a 1,500 acre estate through which flows the River Boyne, a few kilometres upstream from the site of the Battle of  the Boyne.

Following the Williamite War (1689 – 91) half a million Irish acres were confiscated from those who supported James II. The Conynghams purchased the estate in 1701 following the Williamite Confiscations. Prior to this the lands were in the posession of the Flemings, Anglo-Norman Catholics who supported the Jacobites.  Slane Castle in its existing form was reconstructed under the direction of William Burton Conyngham, together with his nephew the first Marquess Conyngham.

The reconstruction dates from 1785 and was undertaken by the most distinguished architects of the day, most notably James Gandon who designed The Custom House and The Four Courts in Dublin and Francis Johnson who is responsible for the GPO, in Dublin. The parklands were laid out by the renowned landscape architect, Capability Brown known as “England’s greatest gardener”.

In 1991, a fire in the Castle caused extensive damage and completely destroyed the eastern wing facing the River Boyne. It re-opened to the public in 2001 following a ten-year restoration programme funded by the family.

Over the last quarter of a century Slane Castle has become internationally famous for its summer concerts, with its natural amphitheatre attracting thousands of music fans.

The Gandon Room Restaurant offers the best of modern Irish cuisin and Browne’s Bar is an eclectic space, full of fun memorabilia, which ties in the Castle history and Rock and Roll. Visit their website for details of Castle Tours or Distillery Tours.