Monasterboice High Cross and Round Tower 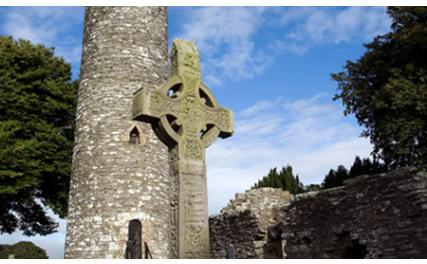 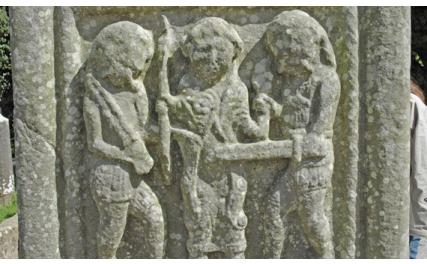 The monastic site at Monasterboice is situated 5 miles north of Drogheda just off the N1. It dates back to the 6th century when it was founded by St Buite. Nothing remains of the original monastery but there are remains of two 10th century churches. The remains consist of an old graveyard, two churches, three sculptured crosses, two early grave slabs and a sundial. Of particular interest here are the 3 Celtic Crosses and the Round Tower.

The cross nearest the graveyard entrance is Muirdeach's Cross, an outstanding example of high crosses of the Early Christian period in Ireland. It is a monolith, 17 ft high. St Muiredach's Cross is widely regarded as the finest of its type in Ireland. The cross depicts Christ the King and there are also depictions from the Old Testement of Adam and Eve,  Cain slaying Able and the Last Day. The West Cross, the tallest high cross in Ireland, is 7 metres high and there is an unusual crucifixion scene  on the west face of this cross. There is a third but much less spectacular North Cross.

The South church is the older of the two and it still has the remains of the chancel arch. The smaller church is situated beside the Round Tower and has no trace of a chancel. The Round Tower is about 100ft high. It is now missing its upper part and conical cap. The door is six feet above ground level and is approached by a modern flight of steps.

The site is open 24/7 and during June , July and August there is a local guiding service.